Birds on the Brain or Visiting Owls - An Audubon Event and H is for Hawk, an Amazingly beautiful novel 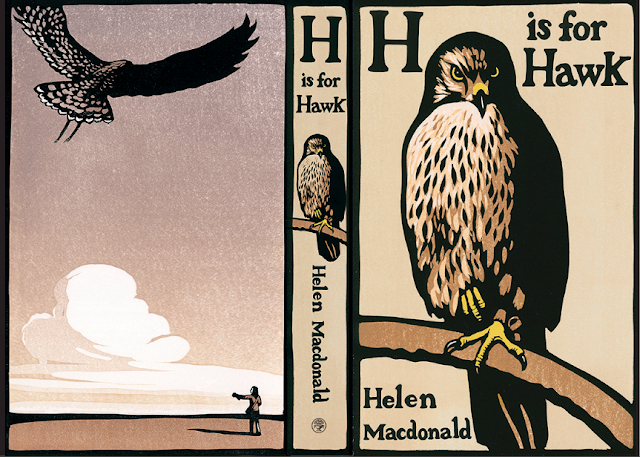 Birds seem to be a subtle theme in my life right now. Part of it comes from the enjoyment of listening to Helen McDonald read, H is for Hawk. It is an astoundingly beautifully written book about how a grown woman comes to deal with the death of her father by training a goshawk. I am smitten with the writing and drawn to the story. I am sure that part of that has to do with the fact that the narrator is working through dealing with her father's death, and I am entrenched in that in my own life. Sometimes that grief is palatable and on the surface. Sometimes it is so present that I feel like I could reach out and grab it. Other times it is like an alien disease that has gripped some one or other of my family and I do not have the antidote to kill it. It must simply run its course. With the holiday season nearing, I know that it will take a more central stage in my own heart as I will miss Don keenly when we do our traditional holiday events. Sometimes I think I should stop listening to the book since it makes me feel sad, but still I am transfixed by it, eager to breath in the next beautiful bit of writing and marvel at her talent.

Reading H is for Hawk reminds me of my friend who is a falconer, without a falcon. Reading this makes me wonder if what McDonald loves about training her goshawk is what my friend loves about being a falconer. It also causes me to look to the sky, hoping to catch a glimpse of a hawk or a falcon, which sometimes happens.

This past weekend, Larr and I got a chance to learn about and see some owls at an Audubon sponsored event. It was a small event, but interesting.

All of the owls were rescued from other places and are too injured to return to the wild. 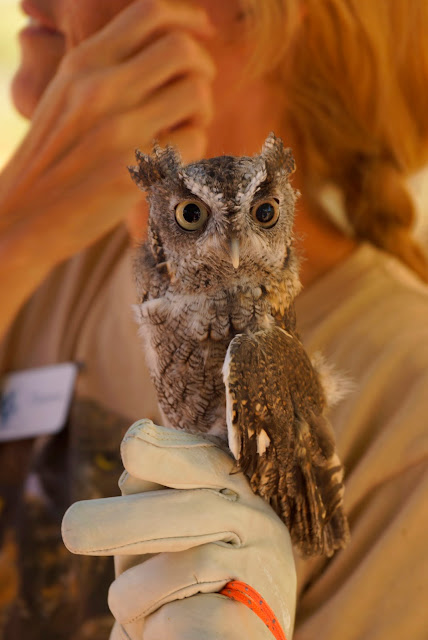 This tiny owl was with its sister when they were attacked. The other bird did not survive. This one had a broken wing that healed wrong, which means that it cannot go back into its proper position or fly correctly. She was no larger than a can of soda. 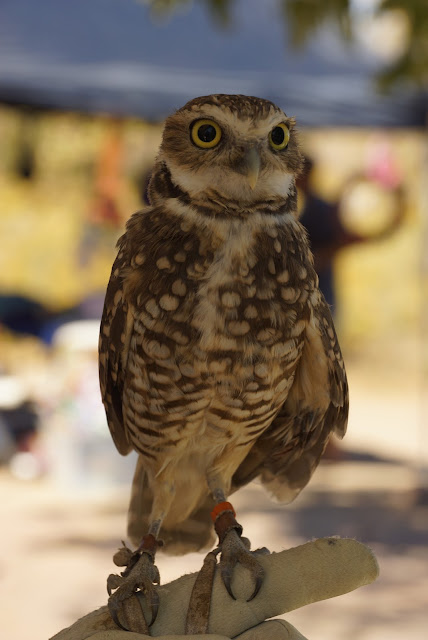 This little guy is a burrowing owl that lives in abandoned prairie dog holes. He had been mistaken for a prairie dog and was shot. He was a bit more wary of people than the tiny owl. 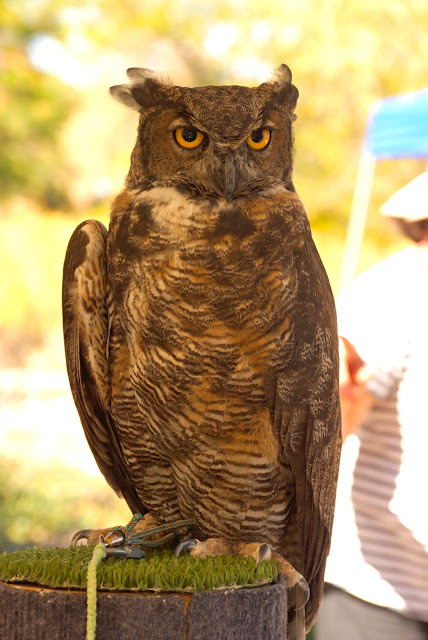 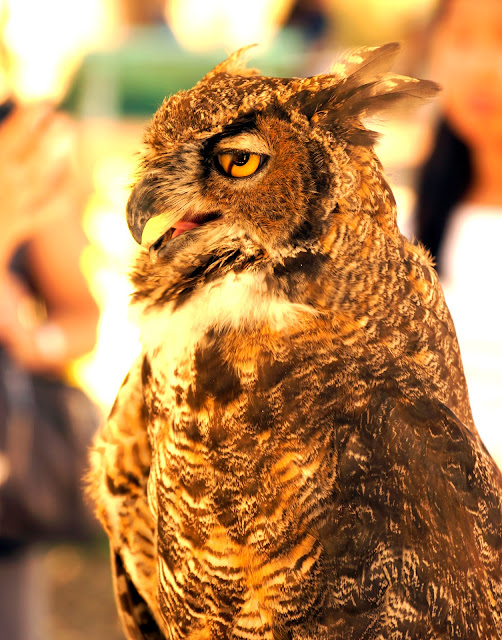 This big, beautiful girl came from Alaska where she had been hit by a car, somehow survived three or four days on the ground since she could not fly. They think she managed to climb part way up a tree to survive. She was shipped to Denver for a special surgery and has lived here ever since. She is an old, crotchety bird, unhappy at having to be on display. She likes to bite her handlers, but she is glorious to look at. 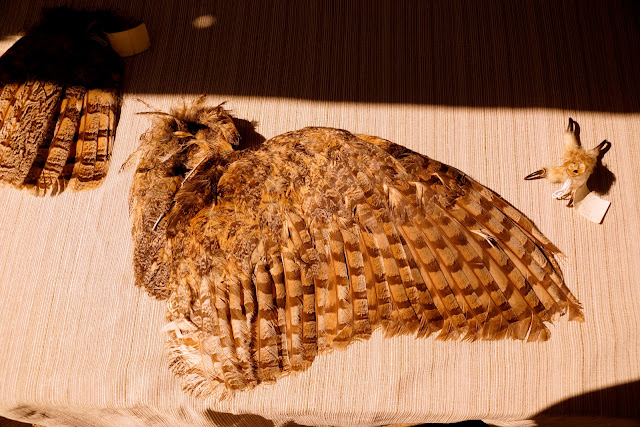 You could not actually touch any of the live birds, but they did have feathers and wings that you could feel. 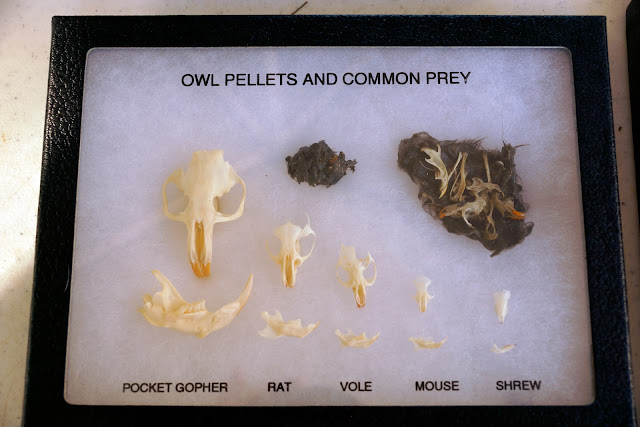 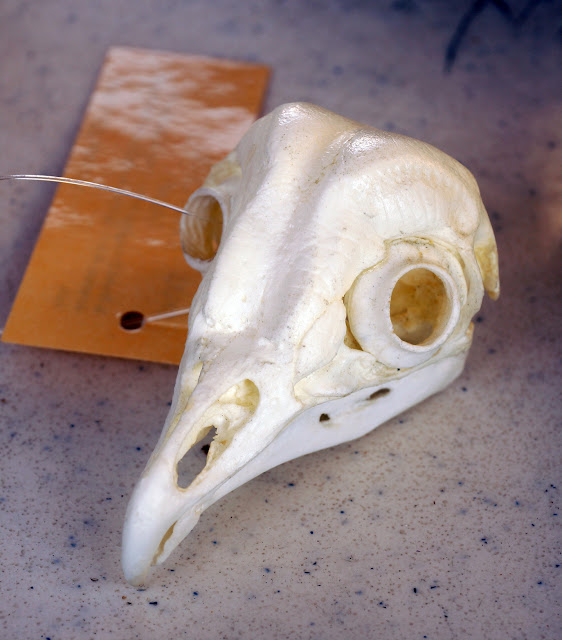 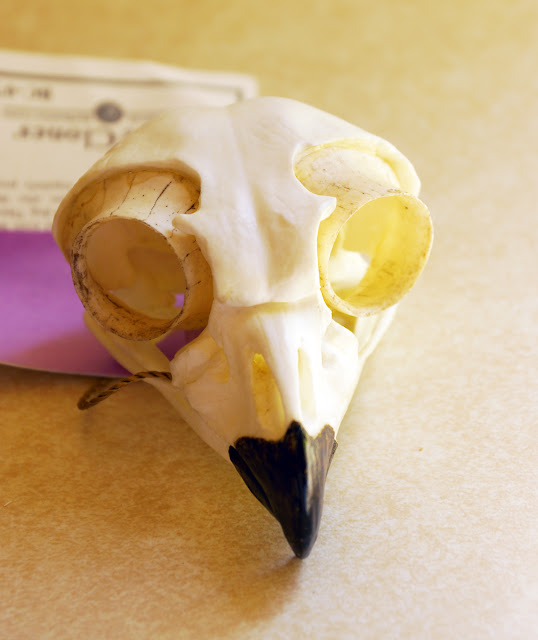 They also had an interesting collection of skulls and bones. Bird bones are hollow, making them very light. 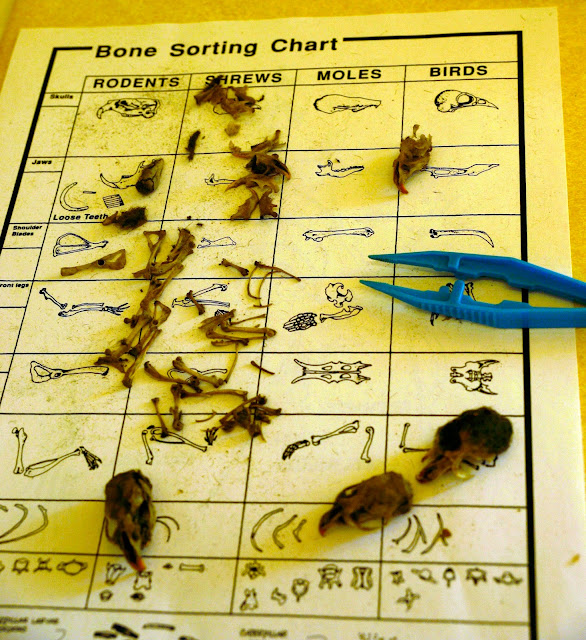 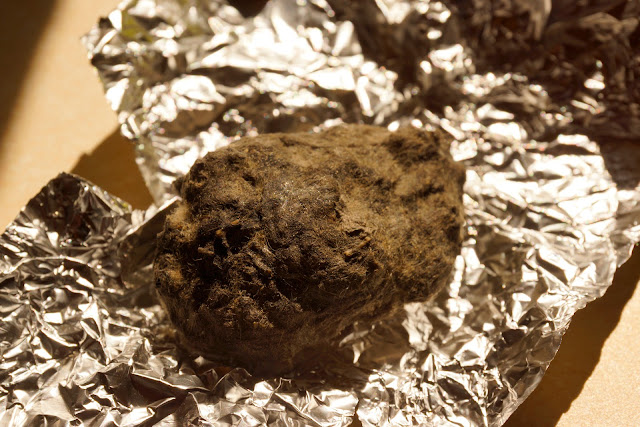 Owls cannot digest all of the parts of the things they eat, so they spit up these fur and bone pellets every single time they eat. The organization had collection of them from a family that has a tree on their property where owls live. Both of the adults are dentists who collect the pellets, put them through an autoclave to sterilize them so that people can dissect them and discover what is left over from an owl meal. It was interesting, but I did not take the time to do one myself. I was mostly interested in getting photos as reference for drawing.

Welcome to My Blog

Welcome to "A Need to Create." This blog started out as a way to document and share the various kinds of creations I enjoy making.

However, it has become more like a diary of our family events. You'll find lots of posts about my kids, Ellie (17) who is a senior in high school and Ethan (21) who is currently being a sailor on a tall ship off of the West Coast. They are on the verge of adulthood and I am thankful to be part of their journeys.

I also like to cook and post recipes. I post a lot of our recipes. We were Paleo for a while, and now my husband is vegan. I craft, quilt, sew, paint, knit, etc. when I have time.
I hope you find something to amuse you, inspire you, or at least make you smile. Thanks for stopping by.

Tammy W
I have a nearly insatiable need to create things - from paper, paint, fabric or food. While it is fun to have end products, it is the act of creating that it important. It can put me in a nearly Zen-like state of happiness and contentment. My postings here will chronicle my processes. I am a mom of two kids, Ethan (18 years old) and Ellie (14 years old). I met my husband on a blind date in high school and have been in love ever since. By day I am a HS English teacher. I also teach reading and am an English as a Second Language teacher. I also write and facilitate online professional development graduate level courses for teachers.